Saying goodbye to our Schnauzers is the hardest part. Share your memories here as we bid farewell to our beloved friends. They've crossed the bridge and returned to the meadow in full health and free of injuries. Running free. We won't forget.
Post Reply
9 posts • Page 1 of 1

On 12th September after just a 36 hour illness period we had to say goodbye to our beautiful Stanley. He had been diabetic for just over 12 months but was under control, he went blind in January but we paid to have the cataract surgery in April. He had lost loads of weight but was happy, we had just had a wonderful holiday with him in Norfolk, where he acted like a two year old in the sea, if a dog can smile, that was him for the week. On the Wednesday morning of the following week he had his usual bout of frothy sick in the morning, wouldn’t eat, and drinking like mad. By the afternoon he still hadn’t changed and seemed really unsettled so I booked an appointment with the vet. She gave anti sickness and sent me home asking me to come in the following day and leave him there to check his blood glucose levels. We stayed up all night, he began to act strangely digging in the garden and trying to lie in it, we kept bringing him back in. Then he began this awful groaning. We rushed to the emergency’s vet at 4:00am, he was just given pain killers and we were told to go the the vet as planned at 8:00am. By then he was terribly dehydrated, bleeding from the back passage, temperature, not walking, not standing, we were frantic. He was kept in, put on fluids and given an untrasound, where it was discovered he had a clementine sized tumour. We were advised he was extremely weak, the fluids were not helping, he was unable to stand to see and that we had to make our minds up what to do. He had acute hémorragic gastro enteritis plus the tumour. We decided to end his pain, but it has left us totally devastated, he was only 9, how did this escalate so quickly. We miss our man, the life has gone out of the house and the tears keep flowing. Goodnight my precious boy, feeling like our lives will never be the same without you x 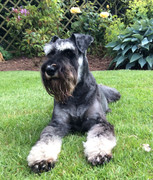 Hi Leslie, I remember Stanley being diagnosed with diabetes last summer. I know it's very raw now, but in time you'll take comfort from the many happy times you had together, not least being your recent holiday.

You're never alone when you own a schnauzer

Oh Lesley, I am so sorry to read about Stanley's passing. His sudden decline into serious illness will have been devastating - we had a similarly swift decline with one of our minis years ago, although she was just under 14 years old at the time but very well until that happened. It does leave you with a sense of unreality as you try to come to terms with something you haven't really had the chance to prepare for emotionally.
It is wonderful that Stanley enjoyed such a lovely holiday with you in Norfolk which will be one of many happy memories I am sure you have of your dear boy. Thinking of you and your family and sending hugs

Dogs are not our whole life, but they make our lives whole. ~Roger Caras

I am so sorry to read about little Stanley passing - very very sad, and so sudden. There is nothing anyone can say to make you feel better, my heart goes out to you and your family.
Top

I'm very sorry to hear this Lesley, it must be such a shock for it all to have happened so quickly. Stanley sure was a handsome chap, a lovely photo you posted there. As Leigh said, it was nice you had a lovely holiday with him in Norfolk and it sounds like he had loads of fun too. Thinking of you at this very sad time.
Top

Devastated for you Lesley. So very very sad. A beautiful boy in that photo and so glad you had those lovely memories of that holiday. Sending hugs and best wishes.
Man cannot survive with wine alone...
we also need a schnauzer.
Top

Lesley I’m devastated for you it’s so heartbreaking for you & certainly a huge loss. So sorry my thoughts are with you. Taken so young & so quickly. I’ve been there too so know exactly how you are feeling at this awful time. Thinking about you.

Know it’s early days when it happened to me I got another which I have to say helped me.
I’m so sorry that you have lost you handsome boy. Xx
Christine & Gino (Siglette Shadow (born 9/5/17 -

We’ve been through a similar experience. From being a healthy dog to having to make a heartbreaking decision 4 days later is a crushing blow. Miss him so much but it was the best decision we could make for his sake. In floods of tears even now.

We decided that the house was empty without a fur baby so decided to have another, early days but Dylan (the villain or destructor pup

) is filling a hole and bringing some joy back in to our lives.

There is light at the end of the tunnel. Just remember the good times and rejoice he shared his time with you.
Oscar 28/12/2008 - 27/8/2019 taken too soon, truly loved and sorely missed. He was a
n annoying git but he was our git

I missed this post. I'm so sorry to hear about Stan. I know how heartbreaking it is to lose a furbaby at too young an age. We couldn't stand the quiet house without Barney in it. Jasper definitely makes us smile again and I think we talk about Barney far more because we have jasper, it keeps him alive.

Everybody is different in how long they wait before another dog. I just knew Barney would want another dog to have the life he had.
Our first family dog
Barney - Pocketpark Biali Eyebright 6/2/13 - 8/3/19 Gone too soon
Motto for owners who groom their own Schnauzers -"Never mind it'll soon grow back"
Top
Post Reply
9 posts • Page 1 of 1