Forum rules
Please do not post questions regarding your dog here. This area allows people to introduce themselves and get to know other members of the forum. Any specific issues can be raised in the appropriate section.
Post Reply
9 posts • Page 1 of 1

Been reading the forum for a month or so now while I was waiting on my male giant, he has been here a week now and Cooper is settling in well. He is 8 weeks old.

I have two Scottish Terriers who have accepted him well in fact surprisingly well, that was a major concern but all is good....... at the moment.....

He is eating raw puppy food at the moment and can’t get enough of it, he is on approx 575g a day split into 3 meals..... believe it or not he is toilet trained already and sits and lies down when told! Can’t believe how quick he picks things up.....

He’s been to a puppy party and is enrolled for another 3......he loved the party and got on well after being a bit reserved when he arrived......

I know I should be giving him about 10mins a day on lead walking but I have a large garden and he likes to run on the lawn and chase leaves etc....... it’s really difficult to restrict him to just 10mins as I think he would get really frustrated. I have read the excercise topic and understand that over doing it could do long term damage but if off lead in the house he flies about and has mad 5min spurts of madness A couple of times a day!, should I be stopping this as well?

I know I have my work cut out With this breed and a novice with GS to boot but looking forward to it and up for the challenge and I have now plenty of time to devote to Cooper.

Will try and upload a photo at the end of this post but I’m on my iPhone at the moment so might not be able to.......

I’m in Scotland, highland Perthshire so if any other giants close by it would be good to hear from you to bounce things off as no doubt there will be trials and tribulations along the way!

Hello Stephen and Cooper - welcome to the Forum

What a lovely boy - so much fun ahead for you both!

No experience myself with Giants so hopefully Forum members with this breed will be able to offer their help and advice. Re the exercise, free play running in the garden should be fine I think it is the repetitive hard surface lead walking that needs to be restricted. There is a link here (with a further link at the bottom of the web page to a chart) which may help:

https://www.puppyculture.com/new-approp ... rcise.html
Dogs are not our whole life, but they make our lives whole. ~Roger Caras

How exciting, a GS and a lovely name. Sounds like your first week has been very successful in your intros with your terriers and wow 575g a day. Hope you keep us posted on how he grows. I adore Giants and your Cooper looks adorable.
Man cannot survive with wine alone...
we also need a schnauzer.
Top

Thought i would check in with an update...... Cooper is now 22 weeks old and everything is going great. He was 7kg when we got him at 8 weeks and now weights in at 24kg...... had to swap from barf to kibble as we have two other dogs and the hassle trying to separate all the feeding and utensils etc was to much grief so they are all on kibble now... the transition was easy and cooper is still putting on regular weight so all good and a lot less grief at meal times.

He is really chilled when he meets other dogs, we live in the countryside and regularly meet all sorts when out walks, we met 3 deer this morning and cooper just sat down and looked up at me as if to say what have i to do with these!!!!... he never made a dash for them or indicated that he wanted to chase. A different thing all together with cyclists and joggers they are a work in progress!!. He is my first and probably only Giant and i cant believe how easy he is to train than my terriers were. I would say after about 10 to 15mins he gets the idea of what i want him to do. He seems so eager to please us and get his treats... he is a pleasure to train and really seems to enjoy it.

My only issue is that he tries to hump everything, my wife thinks it hilarious and i have to admit it is funny at times, he really goes for it big time, its great to tire him out but not so great when we have visitors in

we usually find a hand shake is friendly enough!.....We have spoken to the vet but he says its just a phase he’s at and will eventually die out.

We have two Scottish Terriers and cooper loves the black one jock we have a wheaten one who has struggled to accept him, in truth i think he is a bit frightened of cooper and tends to keep his distance, he will come round in time I’m sure.

Some photos of cooper and Jock his best pal, and after his first visit to the groomers. The groomer was “so looking forward to meeting him” she didn’t seem that keen to meet him again when i picked him up!!!!

When she was sweeping up after she was finished grooming him the bold cooper had a goodbye hump at her leg just to say thanks!!!!

Some photos of Cooper... wouldn’t be without him now. 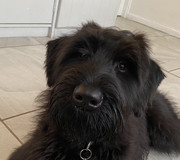 Thank you for sharing the update

Great to hear how well Cooper is progressing and hopefully once he is through adolescence his hormones will settle more and the humping will not be a problem either.

Love the photo of Cooper & Jock.
Dogs are not our whole life, but they make our lives whole. ~Roger Caras

Great pictures and what a handsome boy Cooper is, looking forward to tracking his progress through pictures as he gets bigger

Oh so funny, thanks for posting. He looks absolutely stunning in these photos and it sounds like you are having a great time with him. Your posts are really encouraging me to get a giant (not at the same time as my lovely Otto though lol). Can't wait to hear the next instalment.
Man cannot survive with wine alone...
we also need a schnauzer.
Top

It's funny you say that Julie because I have my heart set on a black Standard Schnauzer - like you, not at the same time as I have Oscar and Sasha (which I don't even want to contemplate, when they are not with me anymore)......I mentioned this to my wife once (getting a Standard Schnauzer) and she gave me 'that' look

Mike, me too actually. Not mentioned to OH. Will probably leave that until the day before we pick one up.....